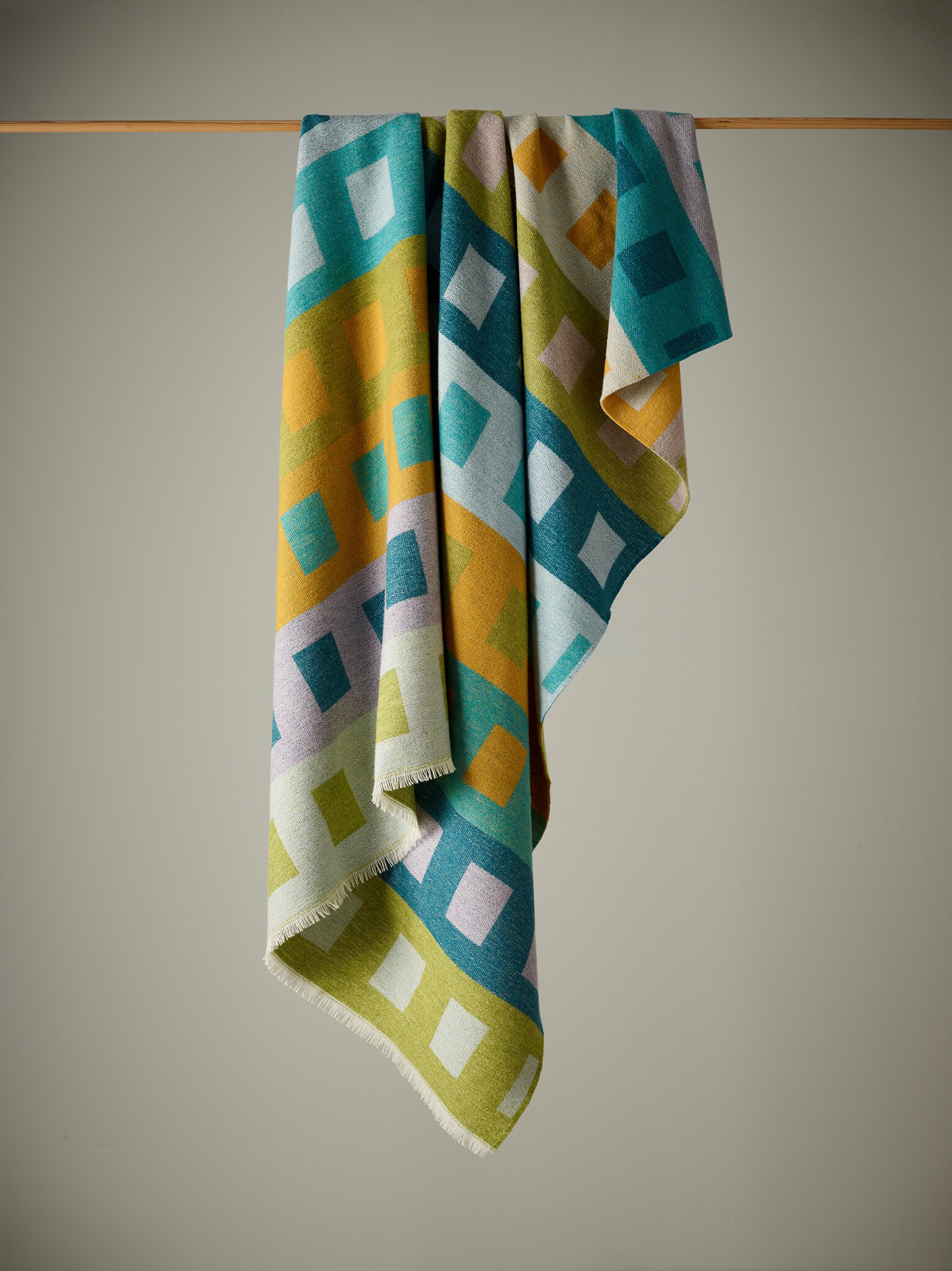 I came across the story of the 14th Century Flemish wool merchant, Thomas Blanket, inventing blankets when I designed The Bristol Blanket in 2020.

My colourful throw, inspired by the painted houses of Totterdown and Cliftonwood was woven by the team at Bristol Weaving Mill-A micro-mill in the heart of the city. It was very much a Bristol thing…

I had created these blankets in response to the pandemic and it was local customers who brought my attention to Bristols’ link to the origin of blankets. But is there any truth in the rumour?

En route to the library, I nipped into St Stephens Church to take a closer look at the tomb of Edmund Blanket and his second wife, Margaret.

The story goes that it was this Flemish merchant and wool manufacturer who invented Blankets, but the tomb gave up little information. There isn’t an inscription, but there is evidence to suggest that this is indeed the Blankets. This includes the clothes worn by the effigies and the modifications to the tomb tie in with the re-building of the church. The timeline fits. Next stop; Central Library…

The information in the archives was much more revealing, and at this point, I need to give a shout-out to the librarians and archivists who helped with this task.

After a satisfying session reading all the available information, I found the evidence I was looking for to conclude that there is a good possibility that blankets were invented in Bristol. Of course, we’re looking at the 14th Century so this is a bit sketchy, but I wasn’t the first to investigate and come to the same conclusion.

In a nutshell, Thomas Blanket swapped the animal skins he had been sleeping under at night for the heavy woollen cloth he had woven on his loom, and immediately felt the benefit. He went on to reduce the cost of weaving woollen blankets by setting up several looms in his Bristol home. He side-stepped the lengthy apprenticeships required by the Guilds and made woven textile bed-coverings more affordable to the masses.

Five centuries later, the Oxfordshire town of Witney became the epi-centre of the British blanket industry and two separate histories there also credited Thomas Blanket from Bristol as the inventor.

The final document I came across was an article by local historian Eugene Byrne. He had researched the same story and had already created a perfectly succinct summary of all the findings. He has kindly agreed to let me share this below, rather than me simply write the same thing again if you’d like to read more below.

Blankets for the 21st Century

I’m delighted that, quite by accident, the 2020 version of The Bristol Blanket has been aptly named for more than one reason. I’m also equally delighted that the success of the original design has enabled me to bring more warmth and uplifting colour to homes in a new collection.

The rug weaving technique that inspired the colour blocks in the blanket is called Summer and Winter, and this subsequently inspired a summer version of the blanket with a joyful yellow, and winter, with a classic slate grey.

Whatever the weather, most of us have taken to turning our heating down in recent times, for both ecological and economic reasons. There’s never been a better time to invest in a quality woollen blanket for your home, and knowing that 10% of the profits from sales of The Bristol Blanket go to Mind-the mental health charity, is another good reason to choose this uplifting design.

Which season are you? Summer, Winter, or Original?

The official launch of these new colours is Spring 2022.

But if you like being ahead of the pack I’m offering an early-bird discount. Simply select SUMMER or WINTER from my online shop. Then use the code EARLYBIRD22 to receive a whopping 20% off your blanket. They’re available for immediate posting so will be with you in a matter of days.

Who invented the blanket? By Eugene Byrne January 2012

Bristol’s most colourful Victorian newspaperman, Joseph Leech, wrote an extremely fanciful account of the blanket’s invention/discovery. In a story in Brief Romances from Bristol History (1884, a collection of what were originally articles in the Bristol Times) he imagined ‘Edward’ Blanket struggling to make his weaving business a success. One very cold night he and Mrs. B were shivering in their bed covered only by a ‘camlet’ of goat hair. Then he had an idea; he went to his loom and took a length of woollen cloth he had been working on that day, and covered the bed with it. They slept snugly, and the following morning he told Mrs. Blanket that he was going to go into the bed-covering business.

“My dearest dame,” said he, “I shall have the honour of giving a name to the article that will make my fortune and carry down my name to all future ages. Let others devote themselves to making cloth to keep them warm by day; be it my business henceforth to manufacture only that which will keep folks warm by night.”

Leech went on to call for an annual Blanket Day, in which Bristol would celebrate Mr. Blanket’s most excellent discovery/invention.

Of course, the whole idea of the blanket being invented here is just a particularly bovine bit of local nominative determinism. The idiot and famously unimaginative ancestors leaping to a ridiculous conclusion, eh?

Well, yes, probably. But not definitely …

The words ‘blanket’ and ‘blanchette’ (plus assorted other medieval spellings) had been in use for at least 150 years before Edmund Blanket’s time. The Blanket family themselves might have got their name from being makers of this cloth, just as medieval blacksmiths acquired the surname Smith, and bakers became Bakers.

However, if you look closely enough, the idea of woollen bed-coverings being invented, or at least popularised, by a Bristolian is not completely ridiculous. It might, just might, have happened.

Only it wasn’t Edmund Blanket who did it. It was Thomas Blanket, who was Edmund’s brother, or possibly his father. Or maybe his son.

Weaving was medieval Bristol’s main industry, underpinning most of the town’s seaborne trade. It was tightly regulated by the guilds and the corporation to maintain the quality of the finished cloth and protect the interests of the weavers and associated trades.

King Edward III (reigned 1327-1377) started to change all that. He wanted the vast English cloth industry to be more profitable, all the better to tax it to pay for his wars. He restricted the wearing and importation of foreign cloth and the export from England of raw wool. He encouraged Flemish weavers to settle in England to build up the cloth industry. Some of them came to Bristol; the Blankets may have been Flemish themselves, or they may have brought in some of these foreign weavers.

In the late 1330s, Thomas Blanket set up several looms at his property in Tucker Street, just south of the Bristol Bridge. He was effectively setting up a factory, employing weavers rather than working as a self-employed artisan. Presumably, his weavers hadn’t had to serve long apprenticeships in the traditional manner. The guilds and the Corporation didn’t like this and tried to put a stop to it.

Immediately, however, word came back from the King saying that Blanket was not to be impeded in any way:

The direct personal support of the king means Blanket was no mere clothier, but a very significant figure. The Corporation got the message and hurriedly performed a u-turn, and Thomas Blanket was made a local official in 1340. Blanket’s importance and royal support would have made him a well-known figure.

We don’t know how people slept in the 14th century. Most poor people probably slept on the floor (perhaps on straw), fully or partially clothed, though getting completely naked to sleep was often favoured where possible as it helped get rid of the lice which infested most of our ancestors’ bodies.

The more prosperous classes owned beds and may have slept in linen sheets under animal skins. Woollen cloth, meanwhile, was expensive stuff, produced by artisans … Until ruthless entrepreneurs like Thomas Blanket came along.

Blanket’s industrial production methods, however small they were by modern standards, may well have gone some way towards making woollen bed-coverings more affordable and fashionable. It’s possible that they became known by the name of the family who was making them.

There’s another intriguing scrap of circumstantial evidence from Witney in Oxfordshire. Witney was famous in the 19th and 20th centuries as the centre of Britain’s blanket industry. Until the duvet came along, almost everyone in Britain went to sleep under Witney blankets. Two separate 19th-century histories of Witney both credit the invention of the blanket to “Thomas Blanket” or “Thomas à Blanket” of Bristol. (Giles, J.A.; History of Witney (J.R. Smith, London, 1852) and Monk, W.J.; History of Witney (J. Knight, Witney, 1894))

The good folk of Witney would have no reason to credit the main source of their prosperity to a Bristolian unless there was a strong local legend there, too.

So then, in summary: Few people, if any slept under woollen blankets until they became affordable and/or fashionable. Thomas Blanket’s industrial production methods would certainly have brought down the price of woollen cloth. He was a minor celebrity who was known throughout the land, and he was credited with inventing blankets not just in Bristol, but in the Oxfordshire village where their manufacture would become the main local industry.

Nope, we can’t yet definitively prove a Bristolian named Blanket invented woollen bedclothes. But I don’t think there’s any definitive proof that he didn’t either.

Angie Parker is a weaver, designer, and colourist, based at BV Studios in Bedminster. She trained in rug weaving in the 1990s and started her textile practice in 2014. Her latest collection of handwoven designs and small-batch-produced textiles are available in her online shop. Subscribers to her newsletter are the first to see new designs and also get access to special offers and exhibition news. Sign up here to keep in the loop.