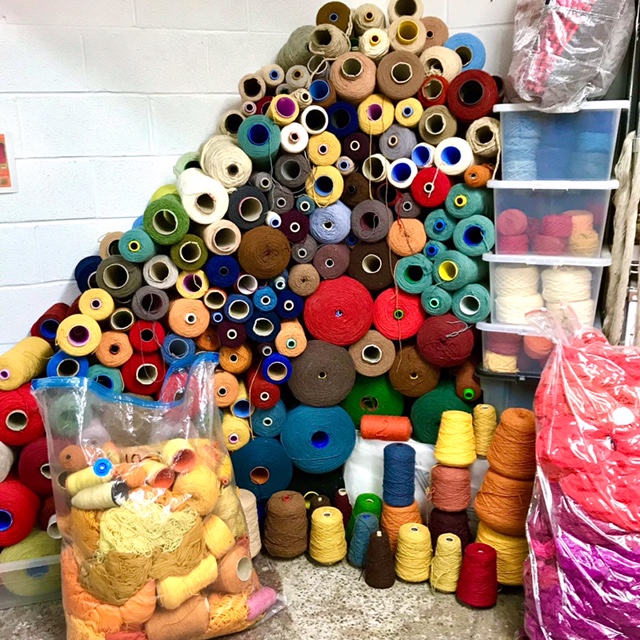 When the once-in-a-lifetime opportunity to purchase the entire contents of the Collingwood rug weaving workshop came up, my gut instinct, without much hesitation, was to snap it up.

Admittedly, the UK’s most prominent and successful rug weaver, Jason Collingwood, announced his retirement a little sooner than I had expected. I wasn’t quite ready, but it was only a ‘small’ matter of logistics.

I simply had to move three full-size looms, all the additional equipment, and approximately 2 tonnes of yarn from Nayland in Colchester, to my shared studio space in Bristol. Only that! Oh, and the sampling loom made from a piano! Fortunately, the reality has allowed this to happen in stages, so much less overwhelming.

There were signals from the onset that this was the right move.

Firstly, I’d set my heart on one day owning the Harrisville shaft switching loom after weaving a rug on it in 2014. I voiced this intention at the time, and possibly a few times since, which put me at the top of the list when Jason decided to sell up. (Does anyone reading know if there are any more of these looms in the UK?)

The fact that I could make the figures work was obviously the biggest factor.

Initially, I expected to move my workshop to new premises for more space. However, in a serendipitous twist, the two adjoining spaces in my studios became available (was it something I said?), and I was able to expand without having to move.

It’s a bit of a squash and a squeeze and it certainly ain’t ‘Instagram pretty’, but it’s working for me and I love being at BV Studios. I can walk to work and it’s filled with so many amazing artists and friends.

Closing a chapter and cobwebs

The move is taking longer than originally estimated, but personally, I think this is better than an abrupt end to this chapter. There’s so much weaving history and some incredible cobwebs in The Old School and I’m conscious to be respectful of what came before. Two more trips should cover it though and I’ll miss my 24-hour mini-breaks driving a white van.

In the meantime, I’m knuckling down to some intense core strengthening and some hardcore rug weaving. And whilst I’ve no inclination, nor the skill set to emulate the prolific business model used by the looms previous owners, I do have productivity targets that require an improved level of stamina and endurance. (Note to self-Time to Plank).

And the wool… Yes, let’s not gloss over the wool-shaped elephant in the room. A wise friend advised me not to go near it, but I’m trusting my gut instincts as they’ve served me well so far, and a deal’s a deal.

That said, my inner critic is screeching expletives on a regular basis about the ridiculous amount of yarn I’ve just transported across the country. Luckily, my inner advocate is louder, and I’m reminding myself that I now have the option to grow my business without buying new raw materials…ever again!

I’ll also try to sell what I don’t need over the coming months so drop me a line if you’re in the market for some good quality sustainable wool.

Yes, right now I feel I’m playing all the key roles in a weaving version of Rumpelstiltskin, although fortunately, no infants need to change hands in return for weaving this heap of wool into rugs.

There’s plenty more to share about my plans for this unusual business move. It feels nuts to be surrounded by more wool than I’m ever likely to weave, and so many looms.

However, it also feels right that this special collection of looms is staying together for the time being, and I’m looking forward to the time when I can open my studio doors for other weavers to use them, while I (to coin someone else’s phrase), pick up the baton to take on the world…one rug at a time. That should be shuttle really, shouldn’t it?

Angie Parker is a weaver, designer, and colourist, based at BV Studios in Bristol. She trained in rug weaving in the 1990s and started her textile practice 8 years ago. Subscribers to her newsletter are the first to see new designs and also get access to special offers and exhibition news. Sign up here to keep in the loop.